Blake Shelton previews “If I’m Honest” album at an exclusive iHeartRadio Concert on the Honda Stage in LA. He also brought a surprise guest, girlfriend and co-writer, Gwen Stefani on stage to sing their duet “Go Ahead and Break My Heart” which is in the video below! Get ready for goosebumps and see this heartbreaking song between the two lovebirds!

Watch the full livestream iHeartRadio concert tonight, May 18th at 8:00PM Local Time by downloading the iHeartRadio App or going to www.iHeartRadio.com/HondaStage Gwen Stefani, briefly joined the country crooner boyfriend Blake Shelton on stage to perform “Go Ahead and Break My Heart” – which they also premiered on The Voice, Monday (May 9th) – she didn’t say much while Shelton told the audience he wrote the tune to “impress her.”

Shelton teased that he paid the former No Doubt frontwoman “like a million dollars” to join him for the show, even admitting that he’s “out-kicking” his coverage with the “very popular” artist.

Before the official release date for Blake Shelton’s album “If I’m Honest” on May 20, the country megastar gave fans a taste of the new record at his release party on the Honda Stage at the iHeartRadio Theater in Los Angeles Monday night (May 9th).

Here is the complete set list from the album release party and tidbits from Blake’s Q&A session with Bobby Bones down below.

9. “Go Ahead and Break My Heart” from If I’m Honest

1. On making this album:
“I say this every time — because you have to feel this way, I think, if you’re going to make a record — but you have to feel like it’s the best you can do and that’s how I feel. The only reason I feel any of my albums are ever finished is because Warner Bros. is like, ‘Hey! we actually have to start printing them now so give us the music!’ Otherwise, we would just keep recording.”

2. The story behind the album title If I’m Honest:
“I just want to tell the truth about what happened,” Shelton explained.
“I was like, I need a title that represents a timeline, like 12, 13 months of my life. Like if somebody just took those months and wrote a story about it, that’s what I want the album to represent … Gwen had her record, ‘This Is What the Truth Feels Like,’ and I had a similar [working] title, ‘What If I Tell the Truth.’ So I was like, I can’t use the word ‘truth’ now…” This inspired him to call the album, “If I’m Honest.” He’s calling it like he sees it, and being … well… honest.

3. The writing process behind “Go Ahead and Break My Heart” With Gwen Stefani:
“Gwen and I wrote a song together — actually the only song we’ve ever written together, sadly. We need to write more songs together I think. We wrote this song towards the end of last year at some point. Actually, I only started this song to impress [Gwen]. I wrote the first half of the song and then she wrote the other half.”

4. On being open with his personal life:
Blake told Cody Alan at the Nickelodeon Kids’ Choice Awards. “[country music] lends itself to emotions and things that you go through when you go through a divorce and, more so, the getting over that and moving on and finding someone else.” Shelton previously insisted that the album wouldn’t include any “juicy details” about his big breakup, but everything in the album is an honest look into what he felt over the last year. In the most recent interview with Bobby Bones, Shelton joked that his life was already in the media and papers “I figured since everybody else is cashing in on my life, I might as well get some of that, too!”

5. On finding time to record new music:
“Here’s the truth: Most of the last four albums including a Christmas album I did — and when I say most, I want to say 90 percent of those records, the vocal part — were done in some room, in some house that I have rented in Los Angeles because I’m out here doing [The Voice] a lot.”

INTERVIEW: Bobby Bones talks to Blake Shelton about “If I’m Honest”
Posted May 13th, 2016 by Nicole Mastrogiannis via iHeartRadio

Bobby Bones recently caught up with Blake for an exclusive interview where he opened up about the new record.

“If I’m Honest” is the follow-up to 2014’s Bringing Back the Sunshine, and features 15 new songs including a duet with girlfriend Gwen Stefani called “Go Ahead and Break My Heart,” a collaboration with The Oak Ridge Boys called “Doing It To Country Songs,” “Friends” (his contribution to The Angry Birds Movie), as well as the latest single “Savior’s Shadow.” The album was produced by long running producer to Blake, Scott Hendricks and contains over 50 minutes of amazing country music.

The star from Ada, Oklahoma kicked off If I’m Honest with the album’s lead single “Came Here To Forget,” which iHeartRadio premiered on March 8th. The song hit the number 2 spot on the US Hot Country Songs chart and number 1 on the Country Digital Song chart with 53,000 digital copies sold in the first week. Blake explained to iHeartRadio that although he didn’t write the song himself, one of the writers of the track (Craig Wiseman) was tasked with writing a song for Blake about all that was happening in his personal life at the beginning of his relationship with Gwen.

On the meaning behind “Came Here To Forget”
“‘Came Here to Forget’ is a song that I absolutely fell in love with the first time I heard it. Craig Wiseman and Deric Ruttan actually wrote the song, and I didn’t realize it but Craig Wiseman was kind of given the task to write a song for me about what had happened to me. And basically about how things went down. I had my personal life, and when I first started seeing Gwen, it’s kind of all in there really. The only difference is we didn’t actually meet up at a bar, it would have been kind of hard to keep that on the down low.”

Speaking of personal songs, Blake calls his duet with Gwen one of the most personal songs to him on If I’m Honest, aside from “Savior’s Shadow” which was written with Jessi Alexander and songwriter husband, Jon Randall. (Jessi also helped write “Friends”) He says that these two are the most personal because he co-wrote both of them. Blake explains that he didn’t write many of the songs on the album, but he did co-write these two.

On the most personal song on “If I’m Honest”
“It’s gotta be either ‘Savior’s Shadow’ or ‘Go Ahead and ‘Break My Heart,’ because I co-wrote the songs, and I don’t write as much as a lot of artists do. Because I don’t have 2 things: I don’t have as much confidence in my writing as maybe I should, or maybe I have just enough, maybe I’m smart about it, but when it comes to making a record, I want to make the best record I humanly, possibly can. And I know that just having my name on a song as a writer is not the smartest way to make the best record that I can make, and so I don’t write a lot, but I don’t put them on my records as much because I’ll hear a song come rolling in by whoever it may be, and I’ll go, ‘Man, they wrote that idea way better than I did. I’m recording that one.'”

On the meaning behind his album title “If I’m Honest”
“I think when my fans hear this new album for the first time, they’re going to realize that it’s been a crazy, crazy past twelve or thirteen months for me. If you’d have told me a year ago the changes that would have happened in my life, I would have called you a liar. And I think the surprise element, the ups and the downs, they’re all in this record if you listen to it. And that’s why I’m calling it, ‘If I’m Honest,’ because I’m just telling it how I see it.”

Well, honesty is definitely what Blake was going for. When making “If I’m Honest,” he had planned exactly how he wanted to create the album, and followed through with his ideas — which is what he is most proud of.

Bobby flew to LA to host a special iHeartRadio album release show with Blake Shelton. Below is a podcast and the two had lots to talk about:

Even though they both went through heartbreak at the same time, they found love within each other. It just happened to be at the right time….you can tell that both Blake and Gwen are so in love and support each other in all their ventures! Recently Gwen did a few interviews this past weekend at the Wango Tango event and was giddy as could be….just like her boyfriend Blake was in his recent interviews! We just can’t get enough of these two!

Video of Gwen on the Pink Carpet at Wango Tango via First Look. 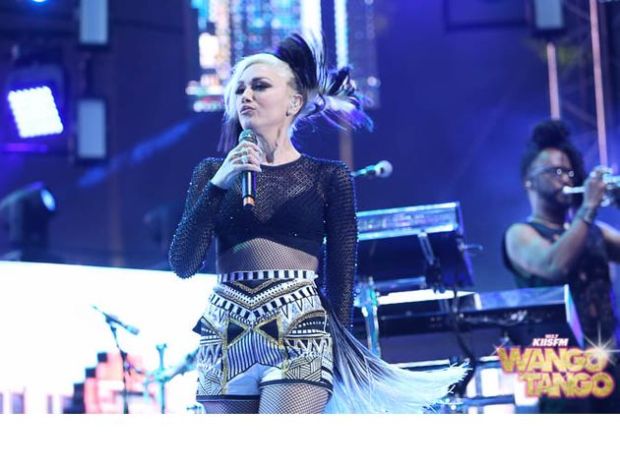 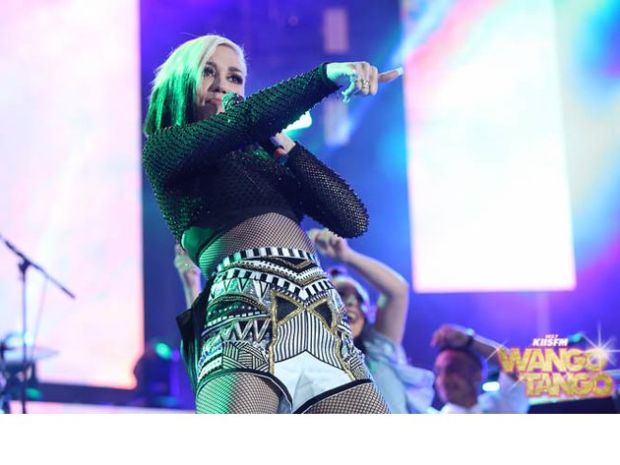 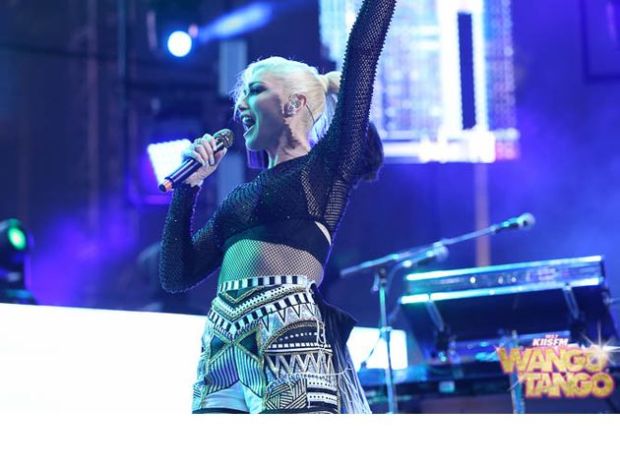 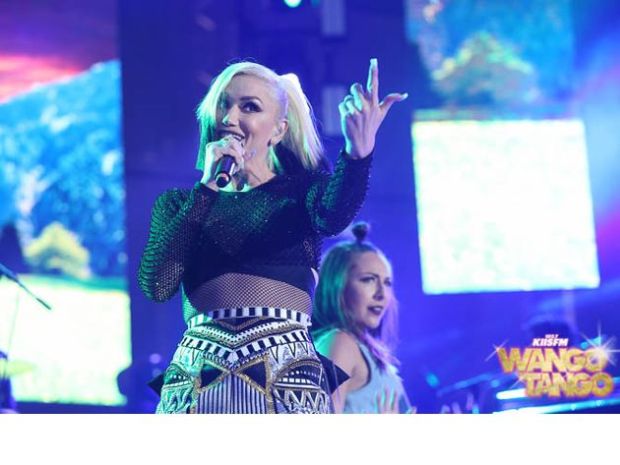 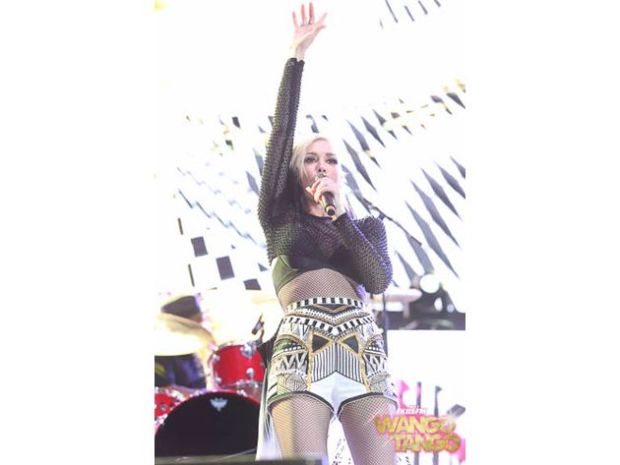 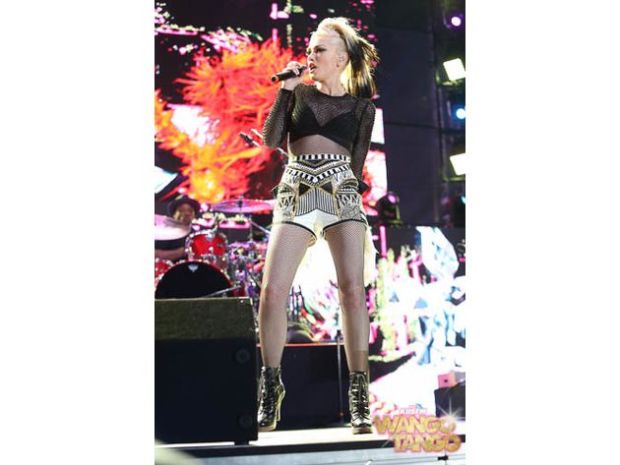 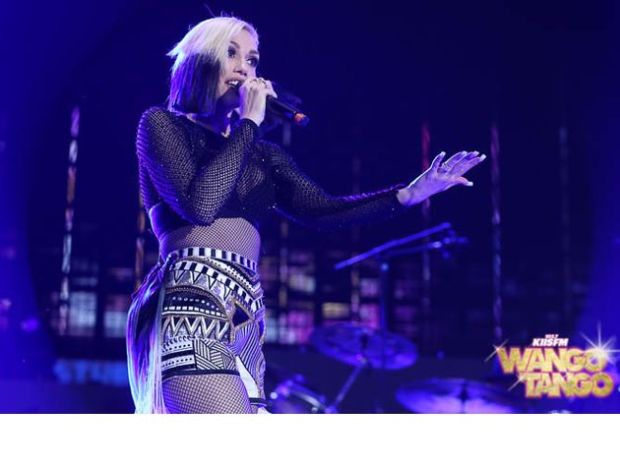 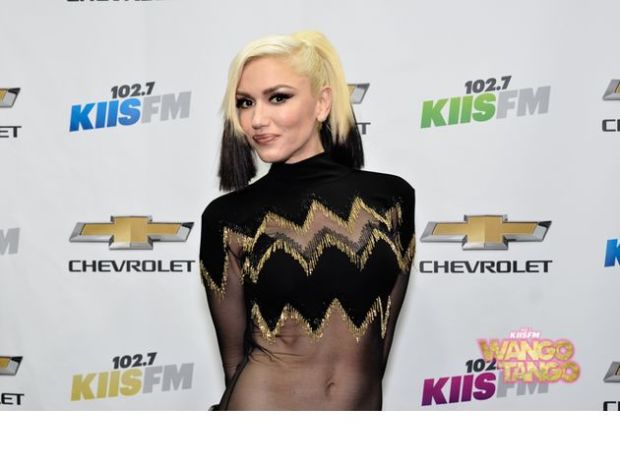